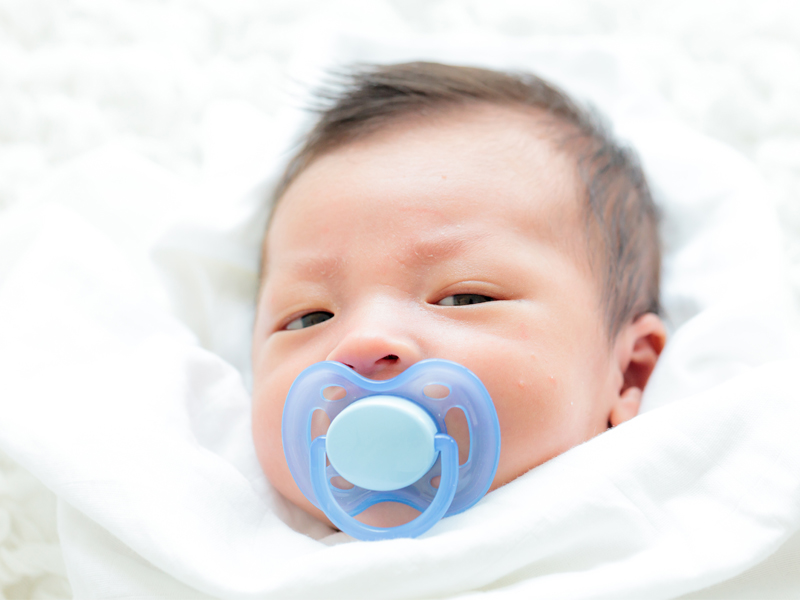 A dilemma that faces many new parents is whether to allow their baby to have a dummy or not. Prior to having a baby many parents swear their babe will never use a dummy. This line of reason is frequently linked to a dislike of seeing toddlers wondering around with dummies in their mouths. Let’s look at the reasons to use and not to use a dummy by answering two frequently asked dummy questions:

“Before my baby was born, I swore he would never use a dummy. Now he is three weeks old, he is crying and unsettled for a lot of the day. My sister-in-law says he needs to suck on a dummy. Should I give him one or am I starting a habit that will be hard to break?”

It is true that sucking really helps to calm young babies. Some babies learn to suck on their own hands from very early on. Encourage this as self-calming is the first very clever, independent skill your baby learns. Your life will be easier if your baby can calm himself, especially at sleep time. However, like many babies under three months, your baby is not self-calming efficiently so needs your help. The startle and moro reflexes move the arms outwards when young babies are distressed, making it very hard to self calm while crying. Help your baby find his hands to suck on, so that he can learn to self-calm, by swaddling his hands close to his face. Frequently this won’t be enough and a dummy can be used to calm your baby.

On a sensory level, a baby needs to suck in order to be calm, and if he is not doing it himself (i.e. sucking his hands or thumb) a dummy is a very effective tool. Getting rid of the dummy is a bridge you can cross later. It will depend on your baby – some just reject the dummy naturally in the first year, others need to be rewarded for giving it up in the toddler years.

Remember the first three months of your baby’s life is a period of huge adjustment. Try not to set yourself too many unrealistic goals (such as getting through the crying with no dummy).

“My baby is 9 months old and he wakes every 45 minutes at night to have his dummy replace in his mouth. His eyes are still closed and I know there are no other problems, he just has a dummy habit – how to we get through this one and get a good nights sleep?”

You are right your baby is waking at night to have the sensory calmer of a dummy replaced. At 9 months old, this is something he should be doing independently. There are three steps to getting him to use him dummy independently at night:

In the next few days, keep putting in his dummy when he cries at night, but during the day never put the dummy in his mouth only into his hand so he learns to pop it in himself in daylight hours.

Once he has achieved daytime independence, do the same at night – never place it in his mouth, rather put the dummy into his hand or attach it to a sleep blanky and put that in his hand so he must do the final step of putting the dummy in his mouth on his own.

When he has advanced to that stage (usually within a few days if he is older than 8 months), stop placing the dummy in his hand and guide his hand to the dummy in the dark. The next night put every dummy in the house into his cot giving him the maximum chance of finding the calming object.