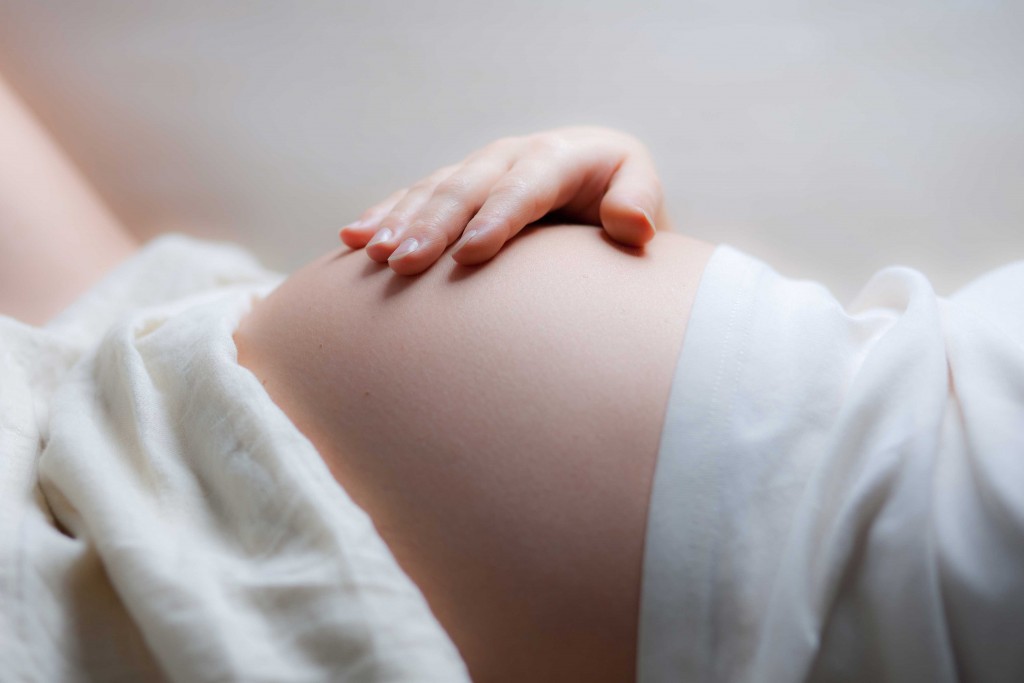 In the last trimester of pregnancy, your little one’s sensory systems begin to make connections in the brain and learning starts. However, unlike other mammals, human babies are born relatively immature. Consider the newborn antelope, springing across the African veld, following the rest of the herd only hours after birth. Her ability to keep up with her mother as the herd moves on is essential for the survival of the species but it is also made possible because of her relative maturity at birth. The human babies are born way less mature, with limited ability to act on their world.

The human baby can not only not fend for himself and survive without a parent, but cannot even sooth or settle himself, depending on his parents to settle him and sooth his cries. This is particularly so during the first three months of the newborn’s life (the fourth trimester). The easiest way to settle your baby at this time, is to mimic the womb world:

Touch – For nine months the only form of touch your baby has experienced is skin to skin – his naked skin against the womb walls, the feel of the cord and the sensation of his own touch. In the labour ward place your newborn baby naked: skin-to-skin on your chest. Cover yourself with a blanket or towel to keep your baby warm. Miraculously, a mother’s chest can increase or decrease by 2 degrees to regulate her baby’s body temperature.  This perfectly natural position is commonly called Kangaroo Mother Care and you can aim to ‘kangaroo’ your baby for as many hours as possible in the early days. It is important to know that if your baby is born healthy by caesarean section, he can be warmed up on your chest instead of being removed to a clinical incubator.

Swaddling is very important in the early days, as it’s the best way to imitate the tight hug of the womb environment. Swaddling provides deep-touch pressure and also stops little limbs from shooting out when your baby is unsettled, which is a common cause of night wakings in the young baby. A swaddled newborn is a more settled baby and will sleep for longer stretches.  For the first nine to twelve weeks, swaddle your baby for all sleeps and when unsettled or colicky. Ensure your baby has some time to kick free of the swaddle when awake.

Smells – Your newborn’s sense of smell is finely tuned at birth. The smells he loves best are the familiar smell of the womb and the sweet smell of breast milk. Do not to wash your baby immediately after birth. Wipe him down if he is a little bloody but do not wash off the vernix. There is evidence that unwashed babies bring their hands to their mouths sooner after birth than washed babies. Sucking on his hands is one of the first, really clever and important strategies a baby will use to self-calm and is important in the development of self-regulation. Aside from vernix, the soothing smells of you is the best olfactory input at this stage. In the early days, keep your new baby’s space free from any scents, as his smell system is so sensitive. An item of clothing that smells of mum or dad in the cot is comforting.

Sight – Create a visually soothing space by dimming the labour room’s lights and bringing your baby to your chest, 20-25cm /8 inches from your eyes, which is the perfect distance for him to focus on your eyes.  Decorate your baby’s room in muted and clam colours and have a light dimmer switch or a nightlight so that the room can be dimmed when your little one is fractious. A calming sensory space is important, as the visual system is a very powerful system for your new baby.  Do not place any toys or mobiles in the cot or crib. The cot must be a calm sleeping space only, not a stimulating play area. For encouraging eye-focus, a few contrasting colour toys or pictures (red, black and white) should be in the room, but keep them near the changing mat where it is appropriate for your baby to be awake and stimulated.

Sounds – The newborn is familiar with and soothed by your voice. For a period of time, immediately after birth, your new baby will be calm and alert, listening and focusing well.  Talk quietly to your baby to calm him after birth. White noise and womb sounds are calming in the early weeks. Buy or make a recording of white noise or play a CD with tracks of calming music ‘mixed’ with the steady beating of a heart.

Movement – Babies are best soothed with movement and rocking. In the early days many babies do not settle unless held. Do not worry about ‘spoiling’ your baby or that your baby is ‘manipulating’ you. The reality is that in the fourth trimester, a baby does not have long-term memory that would create expectations for how he needs to be soothed. Rather, the newborn has a sensory need for the womb and the holding and rocking reenacts the womb space for the new born. A sling therefore is a wonderful tool for soothing fractious newborns and regulating state.

The first three months are a period of enormous transition and adjustment for you and your baby. By mimicking the womb world, you can calm your baby effectively. Swaddling, white noise, and carrying baby are just three examples of strategies that imitate the womb world and calm babies in the fourth trimester.