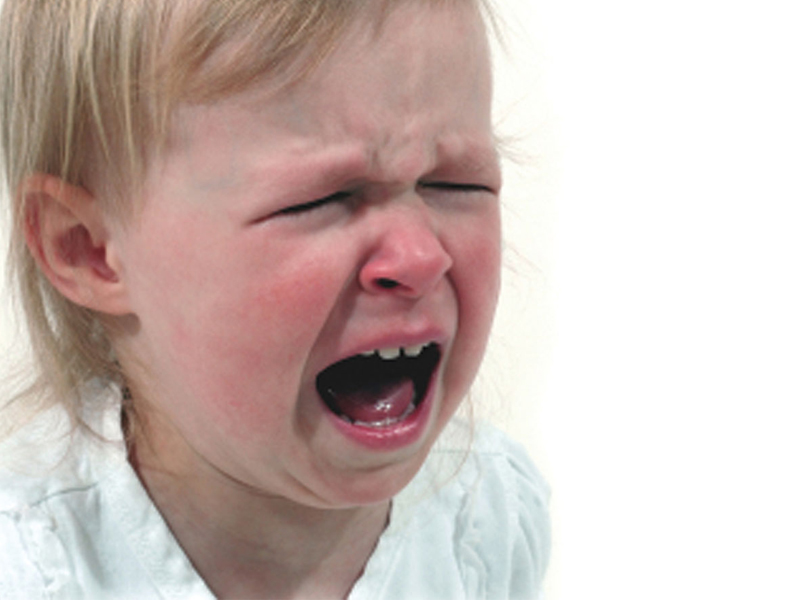 Why is my baby crying?  Does my baby cry too much?  What is normal?   We know you want the answers to these questions, and here is some more info on “Crying through the ages”, covering crying from newborns to toddlers, talking about the REAL cause of colic and what to do about it and everything from hunger and separation anxiety to teething and temper tantrums.

The newborn baby is typically much calmer and cries less than you would expect. Many parents are surprised that their baby does not scream at birth but rather makes quieter sounds and has a period of relative calm. Your hormones released in the birth process and the natural birth process itself results in a calm alert baby on the day he is born.

Even after the initial 24 hours, the new baby is only really likely to cry when hungry, which once the milk comes in can be as often as two hourly or may be spread out to closer to four hours. It is important in the early days to feed your newborn on cue as this will not only settle him but also encourages your milk supply.

The other time newborns cry is when being changed and bathed. Both changing and bathing result in feeling the cold air and new touch sensations, which can be disconcerting for the new baby.

If a newborn (0-2 week old) cries a lot, it is important to have him checked by a doctor or clinic sister as this is typically a period of relative calm, which we call the honeymoon period. Most babies do not cry extensively during the early days.

At around the two week mark, many babies become unsettled and begin to fuss more than during the honeymoon period. This is completely normal and in fact the ‘crying curve’ is well documented. This curve shows that babies begin to cry seemingly without reason at around 2 weeks old and by 12 weeks old this crying has almost entirely abated.  This unexplained early baby crying peaks at about 6 weeks of age.

Traditionally called colic, we now know that in fact this crying has nothing to do with the digestive system and remedies for tummy ailments make as much difference as sugar water. (St. James) Even if your baby tucks his legs up or kicks and screams for an extended period of time, you can rest assured that almost every crying baby of this age is healthy and normal.

Colic is caused by over stimulation. Being alive in our busy sensory world can be overwhelming for many babies and this coupled with too little sleep will result in crying as your baby responds to the sensory input of the world and the little bubbles in his tummy with crying.

The best ways to avert colic is to swaddle your baby and settle to him to sleep after only an hour of awake time. If your little one is very unsettled, do not worry about spoiling him at this age. Under four months of age babies do not have long term memory and so will not be ‘spoilt’ by being rocked or lulled to sleep. Try the baby sense cuddlewrap.

The four to six month old is much less susceptible to overstimulation and therefore is more settled. But just as you think you are getting the hang of this parenting thing, you will find your baby become a little less predictable. Instead of remaining settled for a good three to four hours between feeds, many babies of this age begin to fuss and wake more frequently at night too. This relates to their new and growing nutritional needs. At this age you can choose to respond to the increased demand for nutrition with increasing the number and frequency or quantity of milk offered or you may choose to introduce solids. The latest research indicates the introduction of solids is safe and good for babies anytime between 4 and 6 months of age.

Your 4-6 month old may still become crotchety if overtired or over stimulated. Watch your baby’s awake times (Baby Sense 2010)

The older baby is a bundle of fun and laughs and will not spend much time crying. There are a few reasons that typically raise their heads:

Your toddler has an opinion and mind of his own and generally this will impact on his mood.

There are three main reasons for crying and tantrums

Finally, it is vital to realize that all babies are different. Some settled little ones cry very little and take each stage in their stride, while a sensitive baby cries for almost no reason and is a challenge for his parents.